Don’t leave your trailer hitch exposed to the elements; get a Ford hitch cover. This useful accessory combines function and style. Protecting your trailer hitch from debris buildup, corrosion, and rust also looks attractive and makes your vehicle more stylish. 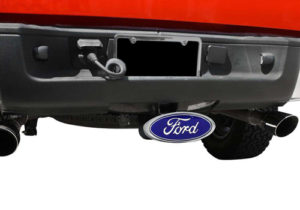 The company that first made automobiles affordably was established in 1903 by Henry Ford and succeeded very soon – its legendary Model T became a huge hit and it still is on the top ten list of the best-selling cars of all time. The Ford Model T is considered the first vehicle that a majority of Americans could afford and the first car to be marketed in various countries simultaneously. About 16.5 million units were sold during the Model T’s production run. Today Ford is still a successful automaker, being part of the “Big Three” and the fifth largest vehicle manufacturer in the world and in Europe alone.

Ford’s pickup trucks are worth a special mention. The current range includes the F-150 and Super Duty series (former F-Series) that are highly praised by numerous drivers in the U.S. and worldwide. The F-Series by Ford was launched in 1948 and is still produced nowadays, for the thirteenth generation as of 2016. The model has been the best-selling pickup truck since 1977 and the best-selling vehicle in the U.S. since 1981. In 2013, Ford produced its 33-millionth truck of the F-Series.

Purchased this LED brake light hitch cover based on other user reviews. Got it in 2 days. Installed in about 10 minutes. Super easy installation.

Installed the hitch cover two weeks ago and it's perfect. Looks really cool, especially at night when the emblem lights up.

It is really nice, looks classy. A good way to show your pride! Would recommend to anyone interested.